This is a relatively straightforward and lower level quest that rewards an ALL/ALL bracer with the focus effect Burning Affliction III. Perfect for Necros, Shamans, Druids etc. 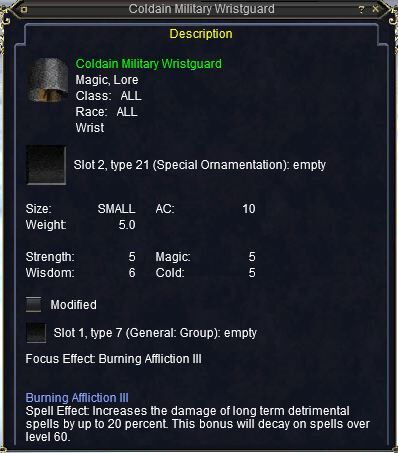 The quest works differently from live. Essentially the first 3/4 of the quest is Coldain Military Wristguard and the last 1/4 is Crystal Caverns' Ancient Artifacts.

Please note - You need to be able to enter Thurgadin and Kael Drakkel to do hand-ins. If your faction is bad in either make a Rallos Zek worshiping Ogre/Troll Warrior/Shaman and run it invis over to Velious from the hub transporter or ask nicely for a port to GD. They can enter either zone at level 1 and perform all hand-ins. All items involved are tradeable.

Here's how to get it.

Don't panic if the two NPCs don't spawn outside of the fort on your first try. The wurm will path back to the cave where you handed it the Harness of Control and then make it's way back to the giant fort. You can try triggering the spawns as many times as you want. I'll have a trawl through the PEQ DB and see if I can figure out the waypoint co-ordinates exactly that triggers the spawns.

Community content is available under CC-BY-SA unless otherwise noted.
Advertisement